Launched in honor of President Obama’s inaugural, this book was written during the most remarkable political season in American history. The author visited all major presidential campaign offices in New York and New Hampshire, attended the presidential debates and was a commentator for PBS and National Public Radio. Allan also attended the historic Democratic convention and toured most presidential libraries.

“A how-to look inside the modern political process, for everyone
from the nervous candidate facing his first TV interview
to the undecided voter who doesn’t want to be manipulated.”

“The essential primer on twenty-first century American politics. Bonner knows
U.S. politics cold and has a unique ability to explain it.”

“a pithy lesson plan for the politician in waiting”

Be the first to review “Political Conventions” Cancel reply 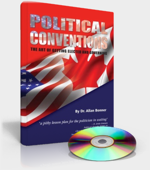