Go behind the scenes with powerful people…

See Undersecretary of State Nick Burns prepping for the media. Find out what really happened when a head of government punched out a protester–Allan was there.

The “How To” columns deal with raising money, research, debates, and pressing the political flesh.

This book is endorsed by right-thinking politicos of all stripes, a President, several Ambassadors, Conservatives, Liberals and even a Canadian socialist.

“I’m honored that you’ve included a column about me…”

“I feel very honored to have been part of your latest book. I am
anxious to read it and know that I will gain some new insight.”

“A pragmatic tour de force: this book is filled
with insights, rich and valuable experiences
and constitutes a great learning. A very
interesting book on how communication
skills, behavioural trends and media relations
can influence one’s success in politics
and public governance.”

Be the first to review “Political Columns” Cancel reply 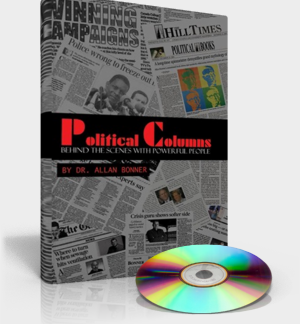